Ken B. and his dilemma regarding quality of life.

This “right-to-die” case brought many questions for our health care professionals. It became very real to me personally because I cared for Ken the last night of his life. I was a staff nurse at Nathan Adelson Hospice and also worked per diem as a private duty nurse on the side. Ken and I became pretty good friends in the short time we knew each other. At first he wasn’t sure about me. He had wanted only the “young nurses.”  It made him nervous when he found out that I had been a nurse for over 20 years. Before long he learned that I was receptive to honest conversation about drugs, death, and his quality-of-life dilemma.

His father was a sweet, devoted man and was very ill himself. He wanted only the best for his son. Ken’s mother had cared for him the first 10 years after his swimming accident. At age ten, he had dived into shallow water which left him a quadriplegic. Ken’s mother had a lot of denial and tried each day to “teach” him to breathe on his own by turning off the ventilator while he struggled like a “fish” until he turned blue. This was the main reason he now sought a court approval for “palliative sedation” before being taken off his ventilator. He was earnest as he cried, “I don’t ever want to feel that way again!” He wanted to be “knocked out” when the time came for him to leave his machine. His father supported him in this decision.

This decision was not made in haste. Ken’s accident happened when he was 10 years old – he was now 31. He had finished school, had a college degree in biology, wrote a book, loved computer games…all with the use of his mouth as his mouse directing his computer world. He just wanted to be sedated before removal of his ventilator. His father was terminal, they had no other family support, and lived in a small trailer park on Ken’s disability check. He was rational and calm with a positive, light-hearted attitude about life and his plight. 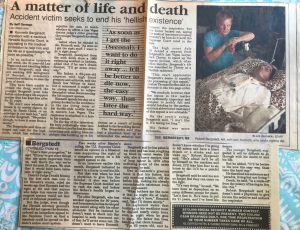 Ken and I talked a lot that last night. He answered my questions quite honestly. I asked if there was any way he could see staying alive without his father who had recently been diagnosed with terminal lung cancer. He told me that he loved his dad very much. “I could continue without him if my care stayed the same.” Ken further explained that he knew he would be placed in some long-term care facility, cleaned and cared for at the availability of their staff. He said that he couldn’t live with that lack of quality.

We made a “game” of the situation and Ken day-dreamed about how he would put together the “perfect scene” for himself if he had all the money he needed – the right caregivers, the right environment, the right equipment, the right women…

It was sad and yet, I could see his point.  I really wasn’t surprised the next morning when the phone call came that he was dead. I wondered what those final moments had been like for him. Had his father given Ken some of his hospice Morphine ? Was he able to die comfortably and not suffer as he had with his mother’s behavior?

Where were the Ethics? A judge at Ken’s appeal case talked about him committing suicide. Was the ventilator actually a physical part of him after 21 years? Who claims at what time the technology becomes extraordinary? One physician I spoke with felt that Ken qualified for hospice and was “terminal” without the assistance of advanced medical technology (his ventilator).